Living in a different country gives you the chance to compare its culture, custom and gastronomy with the one from your birthplace. Today, I'm summing up a few of the most typical dishes from my own country and my hosting one: Spain and Poland.

Some of them you'll probably know, but I hope I can surprise you with some of them as well! 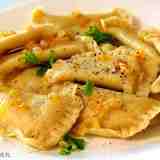 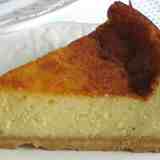 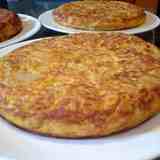 It is hard to overlook the gastronomical variety of Spain. There are many regional specialties throughout the country, but there are a number of foods that you will find almost everywhere in Spain so, if you ever travel to Spain, make sure to try these tasty dishes.

Paella: Originating in Valencia, paella is a rice dish prepared with seafood. Of all the foods in Spain, this is the most popular. In this dish, savory yellow rice is combined with tomatoes, onions, peas, shellfish, squid, clams and chicken drumsticks. These ingredients are cooked in a large saucepan over an open fire with olive oil and salt.

Gazpacho: Gazpacho originated in the southern region of Andalusia, and it is very popular in the warmer summer months. This cold tomato soup can be served in a bowl or in a glass. Ingredients include tomatoes, onions, garlic, bell peppers, oil and vinegar.

Spanish Omelet: The Spanish omelet, or tortilla española, is one of the most common dishes in this country. It is very simple to prepare, and most tapas bars and cafés serve variations on the classic recipe. This dish is made from potatoes, eggs and chopped onions and fried in a pan with oil and salt.

Jamon Serrano: Large slabs of cured pork can be found hanging from the ceilings of bars, restaurants and bodegas all over Spain. They are hung from the rafters to dry, giving off a delicious aroma of ham and spices. Traditionally, jamon Serrano is cut and served in thin slices with a baguette or a slice of toast. 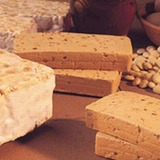 Turrón: This dessert is most commonly found in the northeastern Catalan region. It is a nougat confection made from sugar, honey and egg whites. Almonds are often chopped and added to the mixture. Spaniards often enjoy this treat around Christmas time. 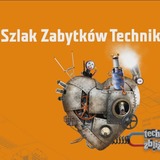 If you wish to keep digging into Polish culture, don’t miss out INDUSTRIADA, an exceptional one-day festival presenting the industrial heritage of Silesia region.